Hot on the heels of last week's release, this week brings another small release to address some improvements and bug fixes as we head towards the holiday period. Here's what we've been up to: ImprovementsMandatory field validation in smart formsWhen saving a smart form on a mobile device, it wasn't always obvious if a mandatory field hadn't been completed. We've made some improvements to this and if a form is saved with an empty mandatory field, the client should be taken back up the form to the field in question. Confirmations won't be sent for appointments in the pastWe've made a change to prevent appointment confirmations being sent for appointments booked in the past. If you book appointments for any time before the current date and time, the appointment confirmation will be ignored and an entry added to the appointment history to reflect this:

Direct message/Smart form access code messageWe've made a small change to the order of the access code text message. The previous text was "Your access code for message DM5D70C3 is 082081. PracticeName"The new text is "Your code is 082081, for message DM5D70C3. PracticeName"This enables iOS to pick up and suggest the code to you, if accessing a direct message or a smart form from an iPhone. Android phones already looked for the numeric code in the message. Ability to 'undo' on the signature field within formsWe've added a small toolbar to the top of the signature field when forms are being completed both within WriteUpp and in the smart forms portal. This allows you to undo, redo and remove anything entered, if for example you accidentally make a mark in the field while scrolling down a form: 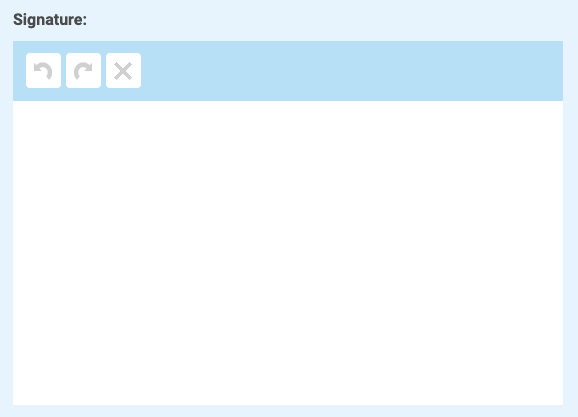 If you see this message, please open the file you tried to upload to check that it has been generated correctly. If it does not open, there is an issue with the file that will have to be resolved before it can be uploaded. If there are any issues with files immediately after they've been uploaded, if for example a valid file is uploaded but becomes corrupted once it's saved, you'll also see an error:

Improvements to variable management within templatesTo help minimise the impact of corrupt HTML in the background of documents and notes (amongst other things), we've made a change which makes variables inserted into templates non-editable, and effectively 'locks' the populated text to changes. You'll be able to work around variables as normal and delete them but not edit them. When deleting variables, you'll also now notice that they'll be deleted as one object, rather than a character at a time. You'll not be able to edit the content when a variable is displayed in a note, document or email to a client. For example, if you use the Current Day variable from the dropdown list, this will insert the current date. You won't be able to edit the date displayed, to change it you will need to delete the date as a whole, which can be done by simply placing your cursor to the right of the variable and pressing the delete button. You can then manually enter the required date. Diary view when logging in for the first timePreviously, when a newly invited user logged in for the first time, they would see the diary of the user at the top of the alphabetical list. We've changed this to improve the experience of a new user and they'll be taken to their own diary the first time they log in. They can then choose which diaries they'd like to see for Day, Week and List view by using the grey panel down the left hand side of the screen to select names. Session number information added to the appInformation on the session number (introduced in WriteUpp v2.14.16) has been added to the app when viewing appointments. Please note you will not currently see the session number when booking or editing appointments within the app, but we will continue to work on introducing this. Mandatory field validation within assessment forms added to the appValidation of mandatory fields (introduced in WriteUpp v2.14.14) within assessment forms has also been added to the app. When completing an assessment form via the app, you'll now see a prompt on screen to complete mandatory fields if any are empty when an assessment is saved. The fields in question will also be highlighted: 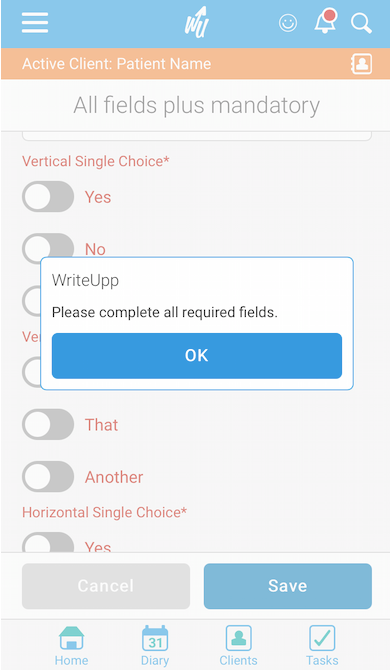 A new version of the WriteUpp app (2.0.4) containing both of the above improvements will be available in the app store for both Apple and Android devices over the next few days. You won't see either of these improvements until you've downloaded the updated version. Keep an eye out for it!Bug FixesWhen resetting two-factor authentication for logging in to your WriteUpp account, or logging in as a newly invited user with 2FA active, the QR code from Google Authenticator was not appearing. This meant that the process could not be completed. This has now been fixed.In edge cases where only one non-client appointment type is set up, the duration of the non-client appointment type was not updating when switching to non-client in the appointment modal. This has been corrected. On the client summary, if the country code entered for the client and the next of kin mobile numbers were different, one would always override the other. This has been fixed and they can now remain different.