To revert back to an earlier version, find the entry you'd like to revert to and click on the double arrow icon:

Then confirm that you'd like to revert to that version:

The version of the assessment or document you selected will then be loaded and saved, and become the current version where you can continue to make changes as usual. Only draft notes, assessments and documents can be reverted back to a previous version. If it's been locked, a site administrator will need to unlock it first.ImprovementsVisibility of sent smart forms on the Messages tab of the Client SummaryWe've improved the visibility of messages relating to smart forms sent by other users on the messages tab of the client summary for privileged and regular users. For forms sent by another user:Privileged users can now open the message sent alongside a smart form on the messages tab.Regular users can now see the sent message on the messages tab, and also open it.Formatting check when pasting content into the WriteUpp AppWe've added a formatting check when content is pasted into the app. This check looks for unsupported characters and invalid background HTML and removes this from the pasted content. If invalid characters are picked up, you'll see this message within the app: 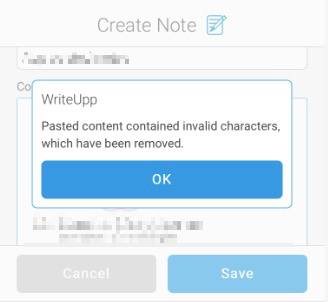 This mirrors what is already present in the desktop version of WriteUpp, and limits the possibility of invalid HTML being introduced to your client information, which can prevent notes being sent out from WriteUpp by email. The notes editor within the app does not contain the formatting options that the desktop version does. If you need to format any notes, we would recommend that you use the desktop version of WriteUpp to do this.Bug fixesWhen choosing which appointments and expenses to invoice, expenses were listed by the date they were created, regardless of the date entered when adding the expense. They'll now order based on the date entered.