Clicking on Quick Invoice will take you directly to the invoice screen for the selected appointment and clicking on View in Diary will take you to the appointment as it appears in your diary. ImprovementsAdditional check on an email address when inviting a new userTo help you manage your users, we've added a check on the email address entered when you invite a new user to your WriteUpp account. This check will detect if the same address was associated with a deactivated user, and give you the option to reactivate the previous user instead if you like:

On clicking on Reactivate, you'll then be asked to confirm this:

Alternatively, you can continue entering new details for the user and re-invite them afresh. Please note that if you re-invite a previously deactivated user, their past appointments won't be restored to their new diary, only re-activating the previous user will do this. We've also added information on the activated and deactivated dates of your users to Users tab within Settings. If a user has been added and removed more than once, the date shown will be the most recent activated or deactivated date. 'Import again' option when importing client demographicsWhen importing client demographics, you'll now see an option to Import again at the bottom of the screen after completing an import: 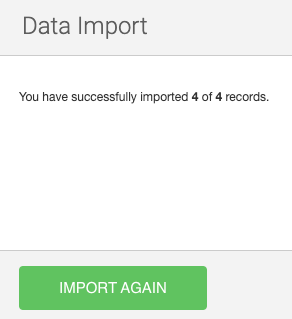 Clicking on this button will take you back to the data import screen, should you need to go through the process again. Bug FixesWhen importing smart fields from a draft assessment form, the import box was not appearing after confirming that changes would be saved. This has been fixed and smart fields can be imported from a draft assessment.In the WriteUpp App, the label was not appearing in the diary view for non-client appointments and was instead displaying "with" just as a client appointment would, but with no additional information. This has been resolved and labels are now appearing.When configuring the Xero integration, bank accounts were incorrectly appearing in the Xero sales accounts dropdown lists, and mapping to a bank account was causing an error. The list of all accounts was also being returned, rather than just accounts with the Type "Revenue". Bank accounts and other account types have been removed from the options listed for mapping.When using the Gmail integration, special characters (like the £ sign) were appearing incorrectly with a "Â" before them in received emails. This has been fixed and the extra symbol will no longer appear.The "Pay Link" variable was not working when contained within an invoice email template. This has been corrected and pay links within email templates should again be working as expected.When opening the video waiting room, the "popup blocked" message was appearing regularly even if the waiting room had opened. This has been corrected and the message will only appear if popups have been blocked in your browser.When quickly navigating to a different week in the diary using the forward and back arrows, you were sometimes presented with a blank diary. This has been corrected and the diary should appear without needing to refresh your screen.A completed Ethnicity smart field was displaying as a number rather than text within assessment list view, this has been fixed.